When you are adopted and have no medical history to rely on, the what if's during pregnancy can be overwhelming. For this Arkansas mom, her "what if" came true and gave her a glimpse of her birth family. Harper was born with a double thumb or preaxial polydactyl and, at just ten months old, had corrective surgery at Arkansas Children's.

“Chris- what if she’s born with two thumbs on one hand?” This was not the first time my husband had heard me ask a random question regarding the baby in my belly. I am adopted, so any medical history I have is sealed. Throughout my pregnancy, I would ask things like, "what if she is blind? What if she is born with a cleft palate? What if she has two thumbs on one hand? What if, what if, what if." This last question came after watching a TV show where a little girl was born with a nub on her thumb that resembled an extra digit. I knew I was being a bit paranoid, but I didn't exactly have family history to base things on.

On March 10, 2013, my beautiful daughter Harper was born. She was the only blood relative I had at the time, and I just could not stop staring at her, looking for any hints of my birth family.  My husband counted her toes, but her hands were fisted in a little ball. No one mentioned anything unusual. She was born on the small side and wasn't eating great at first, so we had a couple extra days in the hospital. During one of those days, we chatted with a nurse about miscellaneous things while she rocked her and she asked, "So what are ya'll going to do about her thumb?" I froze and responded with a laugh, "What, does she have two thumbs?" The nurse gave us a dumbfounded look, and before I know it, Chris jumped up and rushed over to look. Sure enough, she had an extra digit on her thumb, bone and all.

I wanted to laugh. Then cry. I'm pretty sure the first thing I said was, "I told you so!" We learned that this is called "preaxial polydactyly" and that a duplicated thumb is one of the most common congenital hand anomalies, occurring in one in every 1,000 births. In most cases, this occurs without a specific cause while babies are still developing in the womb. In other cases, a duplicated thumb can be genetically linked. Being adopted, I was fascinated by this, as it was just another possible clue about my birth family. We scheduled her thumb surgery for the following year with Dr. Theresa Wyrick, orthopedic surgeon at Arkansas Children’s Hospital. Harper would be about ten months old. It was seamless. We went in early in the morning, and they had completed the surgery by 10 a.m. It was an outpatient procedure, so we could return home that same day. After surgery, Harper would have to wear a long arm cast from her fingers to her armpit for four weeks. That ended up being a struggle all on its own. The part I wasn’t expecting was that because of the cast, Harper finally began crawling on her hands and knees instead of army crawling. She would use that big cast to push down- and then use her body strength to pull it up. She also enjoyed hitting her then 3-year-old brother with it.

After cast removal, she was fit for a small splint that she wore for about two weeks. Dr. Wyrick and the team at ACH were very pleased with her recovery, the appearance and the function of her thumb. After learning some exercises from occupational therapy, she soon had a single, well-functioning thumb that showed great stability and strength.

Harper is about to turn nine, and her outcome was excellent. 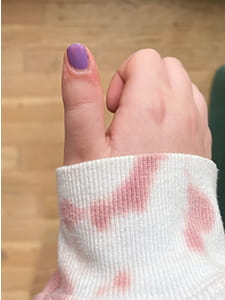 Despite my initial fears for what a duplicate thumb would mean for her physically and socially, (kids can be so mean,) I urge parents in similar situations to not lose hope. You need to do your research, be proactive, and reach out to Arkansas Children's Hospital if you want the best care possible. We could not be more pleased with Dr. Wyrick and her team.

There are three types of polydactyly based on the position of the additional digits: preaxial polydactyly, postaxial polydactyly and central polydactyly. Hand surgery can be extremely complex, giving special attention to tendons, joints, ligaments and soft tissue. The orthopedic specialists at Arkansas Children's routinely treat babies and children with polydactyly and other conditions that affect the extremities.

Arkansas Children’s offers the most comprehensive team of pediatric orthopedic specialists in the state.

Learn about our Orthopedic Department